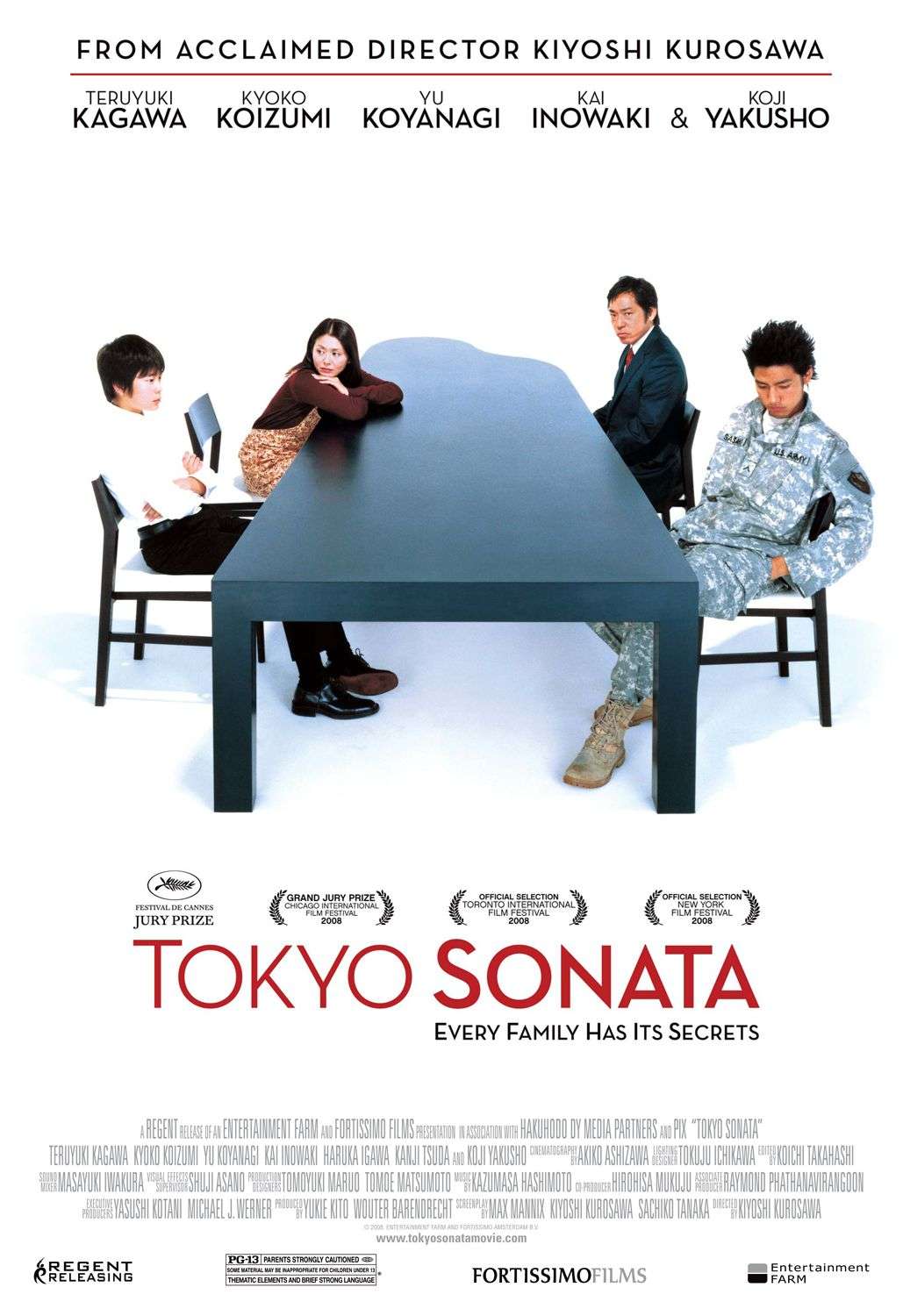 When Ryuhei Sasaki (Teruyuki Kagawa) is laid off, he is too proud to tell his family the truth or to accept part-time manual labour jobs that are beneath him. He spends his days pretending to go to work, lining up for food handouts or killing time at the local library. His family members are also keeping secrets - eldest son Takashi (Yu Koyanagi) plans to join the army, youngest son Kenji (Kai Inowaki) wants to learn the piano against his father's wishes, and wife Megumi (Kyoko Koizumi) struggles to recover her identity and find her place within the family. All struggle to gain control of their lives, or gain freedom from the control of others.

Kiyoshi Kurosawa made his name as a writer/director of genre pieces such as serial killer thriller 'Cure' and J-horror films such as 'Pulse'. With 'Tokyo Sonata', Kurosawa defies expectations to instead produce a film based on an ordinary nuclear family. Part family drama and part bleak portrait of the pressures of modern society (with moments of humour that provide relief and fantasy elements that inspire hope), 'Tokyo Sonata' has won many awards, including the Jury Prize of the Un Certain Regard section at the Cannes Film Festival, and is often regarded as the director's best work.

On the one hand, 'Sonata' works as a loose collection of observations about everyday life and Japanese society. For example, in one scene Kenji's piano teacher receives a final phone call from her ex-husband. After hanging up, she comments that divorced couples were strangers once, and become strangers again. These simple moments do tie in with
Kurosawa's often visited themes (such as isolation), but taken individually each observation is memorable and deeply affecting. On the other hand, there are clear themes that run throughout this film, such as what we do to give our lives meaning, or how secrets can be an act of rebellion or empowerment as well as a point of vulnerability.

The film is often blackly funny and heartbreaking within the same scene. For example, when an unemployed friend of Ryuhei's invites him to a family dinner, the friend pretends to take a work phone call, then returns to the dinner table and criticises Ryuhei for his shoddy work, for which Ryuhei apologises. In another scene, Ryuhei makes his own family wait to eat while he first downs a glass of beer. Kurosawa treats his subjects with kindness in his handling of these scenes, meaning that the characters always have our sympathies even when they behave badly.

Where 'Sonata' will resonate most with viewers is its study of our fear of failure, fear of falling out of society, and fear of losing control of our own family. Truly, both society at large and the inside of an average family home can prove just as scary as anything from Kurosawa's own horror films, but this film also remembers to give us hope for renewal. Also, watch out for Kurosawa regular Koji Yakusho in a memorable appearance as a robber.

Greg Corbett has been visiting Japan since 1998. His interests include Japanese language and culture, taiko drumming, film and festivals.