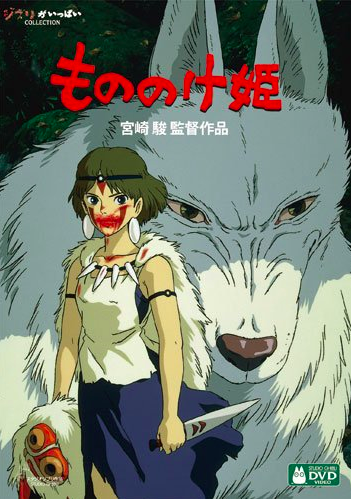 In Muromachi period Japan, young Prince Ashitaka is wounded while thwarting an attack on his Emishi village from a demonic boar creature. His wound is deemed to be a curse that will spread and slowly kill him. Cast out of his village never to return, Ashitaka travels to the west to seek a cure from the Great Forest Spirit, and there he encounters a young girl named San (the spirit/monster princess of the film's title) caring for the wounds of a wolf god. A fierce warrior raised by wolves, San is waging Guerrilla warfare on nearby Irontown, which has prospered through the destructive clearing of the forest. With time running out before the curse takes him, Prince Ashitaka finds himself embroiled in a conflict where both animals and humans are anything but unified, and where altruism and self-interest drive its many players to commit acts of increasing desperation and atrocity.

This year marks the 20th anniversary of Hayao Miyazaki's fantasy period drama epic, 'Princess Mononoke'. A critical and commercial success on its release, the film broke box office records in Japan and won Best Picture at the Japan Academy Awards, the first animated film ever to do so. Gritty and bloody, the film's dark and violent tone sets it apart from other entries in the Ghibli canon, though the film shares thematic elements common to Miyazaki films, such as pacifism and environmentalism.

There is also a typical absence of an obvious bad guy, as most of the main characters arguably have altruistic motivations. For example, as the leader of Irontown, Lady Eboshi is a socially progressive pioneer motivated by the need to protect her burgeoning township. In the process of clearing the forest to produce iron, she gainfully employs a group of former prostitutes. She also plans to kill the Great Forest Spirit in the belief that it will deliver a cure for the many lepers that she cares for. The titular heroine arguably has the purest intentions of all, but she drives much of the story's conflict (and is even admonished by the more pacifist male hero for doing so). This kind of moral ambiguity makes it difficult for the viewer to pick sides, but it makes for compelling drama when characters collide.

The visuals are also stunning, from the character designs to the John Ford-inspired sweeping vistas and 'frontier town'. Many of the film's images (the sight of San going into battle, the Forest Spirit coming out at night, to name a few) also leave a lasting impression.

In a 1997 interview, Miyazaki recounts a story about the people of Yakushima (an island of Kagoshima where location scouting for this film was conducted). In the past, the local people would not cut down trees for fear that they would be cursed. However, the locals finally decided to cut down the trees when they became too poor to eat. His point in telling this story was that over time, the loss of sacred natural beauty no longer causes us sadness or fear of retribution from spirits. Twenty years on, 'Mononoke' still has a relevant message about the importance of living humbly and not exploiting nature, but even more striking is its nuanced and honest exploration of our inevitable urge to destroy nature in order to live, while underscoring the crucial importance of always retaining a feeling of sorrow for our destructive actions.

Greg Corbett has been visiting Japan since 1998. He has a keen interest in Japanese language and culture, and helps to organise a number of Japanese cultural events in Adelaide.