How did you start becoming interested in Japanese culture? 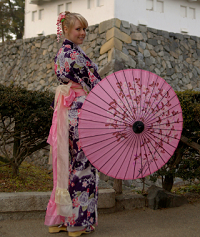 As a small child I started watching two Japanese animated series: Astro Boy and Sailor Moon. Then, in early high school I had a Japanese pen pal, who I still keep in touch with today. After watching 7th Samurai, and various other Anime series on SBS in the evenings, I attended the second ever animation and video game convention (AVCon) in Adelaide. Over the last 5 years I have even been personally responsible for bringing two new events to AVCon, and in the last 2 years I've been heavily involved in the promotional side.

Tell us about your experiences in Japan.

"My first trip to Japan was in 2008. I spent six weeks travelling around central Japan (Tokyo, Kyoto, and Himeji). I've had a wonderful time shopping in iconic places like Harajuku, Shinjuku, Shibuya, and Akihabara. At first I was mostly into Japanese pop culture, fashion and Anime, but after my travels I became more interested in Japanese history, culture, and cuisine. During my most recent trip I visited Japanese friends that I had met in Australia, and I also attended a wedding.

May this year I applied for a job in Japan at a ski resort. I had three interviews (one held entirely in Japanese). I was successful in my application, and provided my visa application is approved I will move over to Hakuba Goryu Ski Resort (Nagano) in late December. This year I have been focusing on learning to speak and read Japanese.

I like the fact that my interest in Japan has allowed me to travel, learn a language, get involved in community events in Australia, and meet some amazing people. Hopefully soon I'll also have the opportunity to live and work in a whole new environment. Who knew that simply watching Japanese animation as a small child would lead me down such an amazing path in life, and allow me to experience the wonders of Japan.