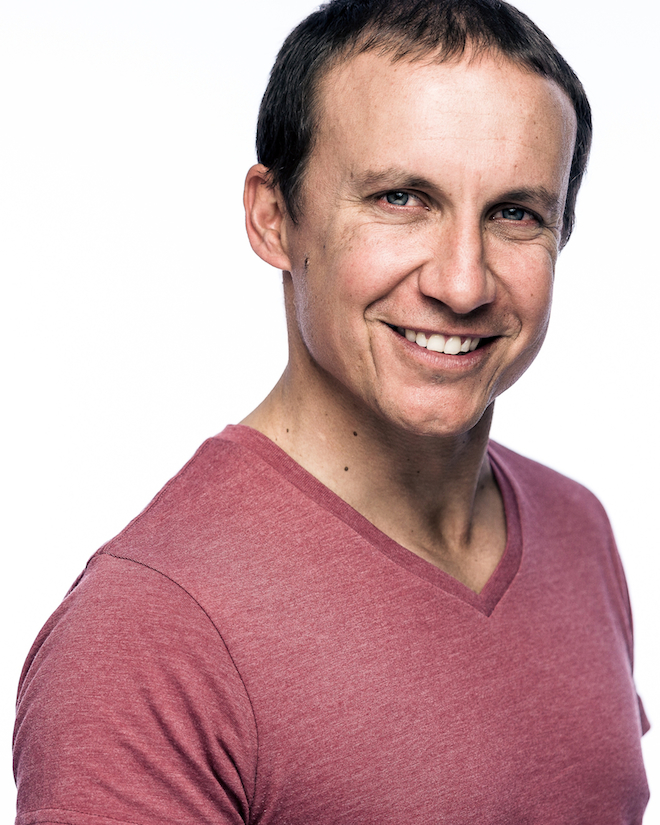 What did you do on your most recent trip to Japan? 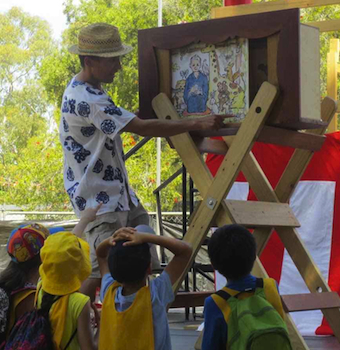 I was the recipient of the Bank of Tokyo-Mitsubishi UFJ Japan Travel Fund (thanks to Arts South Australia). My project involved training in traditional Japanese performing arts (rakugo, kyōgen and kamishibai), and building bridges of artistic exchange between Japan and South Australia.

I was very fortunate to receive personal training from Mr. Katsura Asakichi, a professional rakugo artist, who has even performed at the Melbourne Comedy Festival. Another artist I met, Mr. Katsura Kaishi, the 'king of English rakugo', has travelled around America performing at numerous events. I also drew inspiration from the very first professionally trained rakugo performer, Mr. Kairakutei Black. He performed in the Edo period, and was from my very own Adelaide! Performing rakugo allows for a little improvisation at times, which I love. Traditionally, however, like most Japanese art forms, it is very structured.

This is definitely the case with the main training I undertook, kyōgen. Even many Japanese people aren't familiar with it. Kyōgen is like a comic kabuki, where skits from Edo times are performed. Characters speak in strange voices, and move in deliberately exaggerated ways. When people see kyōgen for the first time, they try not to laugh, thinking it may be offensive to do so. But unlike the darker, more dramatic noh and kabuki, kyōgen encourages people to laugh and have fun! An audience of children usually receive a short explanation about kyōgen from one of the actors before the show starts. I think this would benefit many adult audiences too.

Which performance style has the most appeal for you? 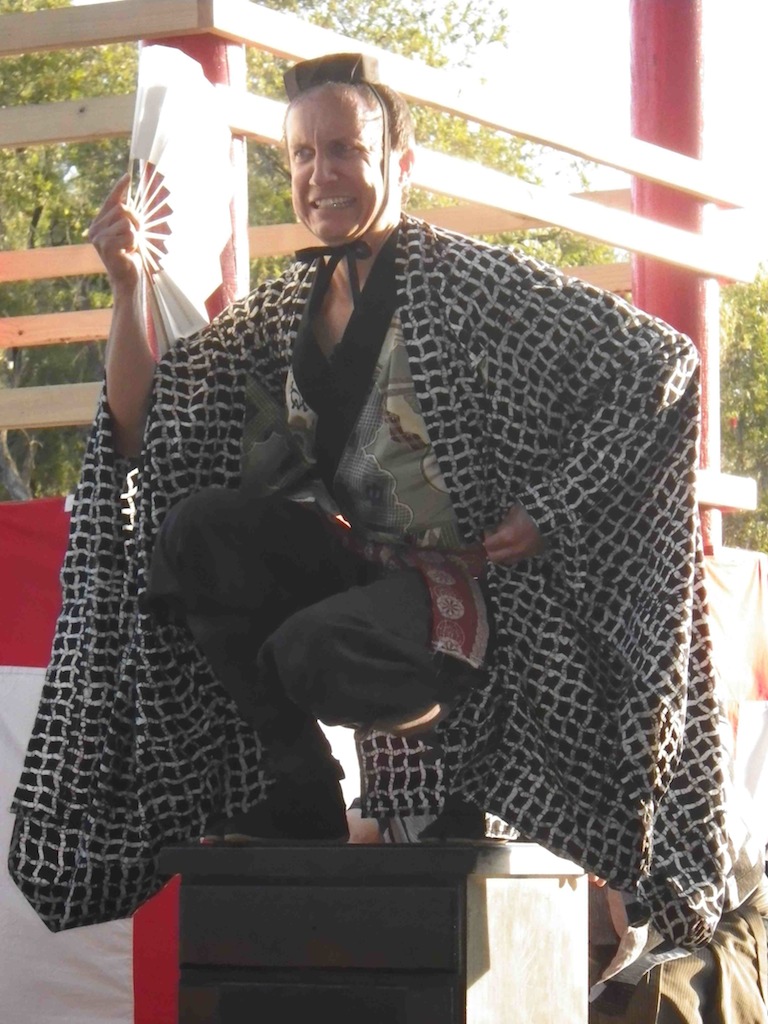 I feel that kyōgen resonated with me the most. I was drawn to the disciplinary challenge of continually removing excess speech and movements. This is Japanese simplicity at its finest. From a life perspective, my training has helped me to focus on only what is important, and ignore what is not.

It was a true honour to be personally taught by kyōgen master Mr. Senzaburo Shigeyama. His knowledge, passion and skills are truly amazing. On top of this, he is also very warm, friendly and down-to-earth. In a mostly male-dominated art, Shigeyama Sensei teaches many women and children too. After being impressed by a video of my kyōgen performance at AsiaFest, Shigeyama Sensei wanted to meet me. As luck would have it, I had performed one of his family's stories, 'Kaki-Yamabushi' (The Persimmon Thief), albeit a unique version full of Osaka dialect Japanese and Australian English for our Adelaide audience members. It's lucky that Shigeyama Sensei embraced it!

What kind of training did you do?

I was very fortunate to have many private lessons. I also did lots of cleaning beforehand, which I feel is good to prepare the mind for the training. I was given a script that I had to go away and learn. Then I'd sit down in 'seiza' and we'd go through it line by line. He would say the line and I would repeat it, and if I didn't get the right tone we would do it again. My Australian legs weren't used to an hour of 'seiza' on a hard wooden floor, so it was good motivation to get through the script quickly!

I became interested in Japan through martial arts - I did freestyle karate as a kid. I became interested in the culture, so I started studying the language at high school. I entered speech contests, and always got honourable mentions for colourful performances (usually involving costumes and wigs!). These colourful performances continued through my studies at Griffith University on the Gold Coast.

I lived in Japan for about 6 years in various cities. Interestingly, I never did any martial arts over there. I used to love the martial arts 'kata' (form). In a sense, everything has come back full-circle, as I now practice the 'kata' of kyōgen. I briefly taught English in Kobe and Osaka, picking up the Kansai dialect. This funny slang has proven to be very useful!

I then decided to move to Tokyo to pursue acting. I was lucky enough to find a place in Shimokitazawa, which is the central hub for creative people - musicians, actors, stylists, fashionistas etc. I started to get some auditions, which is great, but doesn't guarantee any income! However, I decided to 'take the leap', and quit English teaching. After lots of hard work, I managed to secure full-time work as an actor in Tokyo for about three years (the words 'full-time' and 'acting' don't usually go in the same sentence!) I mostly did TV commercials, comedy skits, re-enactment dramas and some modelling. I wasn't exactly going to win an Academy Award for working in Japanese TV, but I had lots of fun! I was also glad that my limbs were all intact after all the crazy game shows I did! I learnt so much from some amazing Japanese performers, including Beat Takeshi, Neptune, Sanma-San and SMAP, just to name a few. If you go down to a Karaoke box and look up the song 'Quincy', you'll see me - I was BoA's boyfriend in a video!

What was the most memorable thing about your time in Japan?

The most memorable thing was proposing to my wife. I knelt down in the freezing snow to 'pop the question'. Whilst cooking up a gourmet dinner for her, I'd asked if she wanted to try the special bottle of wine that we had bought together in Australia. She said no, saying it was intended for a special occasion. She didn't take the hint there! We went for a walk outside in the freezing cold and made a snowman. Then, when she was standing on a swing, I got down on one knee in the snow and pulled out the ring. She cried for about five minutes, and eventually I had to ask, 'is that a yes or no?'. She said 'yes'! It was also Valentine's Day, so it was extra special.

How do you see your future in relation to Japan?

Life has no script! I like having Adelaide as a base, but I intend to continue travelling between Australia and Japan. I wish to further my performing arts training, and continue to share my skills and experiences with communities in Australia and Japan. I am currently developing a variety of performances and workshops for schools, universities, corporate groups and arts festivals (OzAsia, Adelaide Fringe, Kodomo No Hi Japan Festival, Matsuri on Mobara and more). I'm excited by future opportunities to collaborate with Japanese and Australian artists, on projects that both honour ancient traditions, whilst exploring new possibilities. 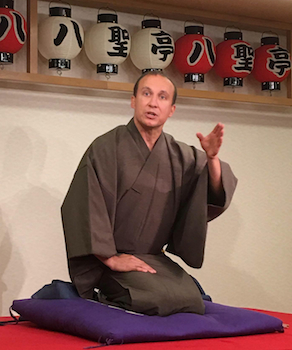 To enquire or book Jarrod for a performance or workshop, please email him at jarrodhoare@hotmail.com. You can view his showreel at http://www.jarrodhoare.com