Rice and side dishes come together to create a hearty meal, and donburi-mono is so popular that there are trendy specialty restaurants in Japan, and it is gaining popularity here in Australia too. From the classics that condense the techniques of Japanese cuisine to arrangements of international foods, the variational possibilities are endless. Let's zoom in on the attraction of donburi-mono!

Donburi-mono is literally a 'donburi' bowl filled with freshly steamed white rice and topped with something special, enjoyed with a soup or sauce poured over it. Not only is it delicious, it is also quick to eat and nutritious, making it perfect for a quick lunch when you are busy with work or dinner when you are studying; a great meal for both the cook and the diner! In Adelaide, dishes like the 'Aburi salmon' (char-grilled salmon) and other arrangements are popular!

Donburi-mono first began to be eaten during the Edo period. Back then, restaurants known as 'kendonya' served meals in a pot large enough that you didn't need seconds. Many Tokyo locals were craftsmen, and many were short tempered so the convenience of a quick meal during busy times made kendonya very popular amongst that class of people. Originally called 'kendonya furi hachi', it is believed that this was shortened to 'donburi'. Incidentally, the word 'kendon' means tight with money and greedy.

Everyone Loves Them! Classic Donburi 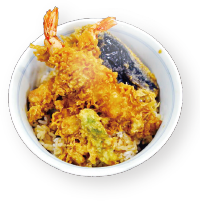 It is believed that Ten-don began in a well-established tempura store in Asakusa called 'Sansada' which was founded in 1837. Various types of tempura are put on a bowl of rice and served topped with a sweet, spicy thick sauce, or the tempura is dipped in the sauce before being served on the rice. Tempura types commonly used include seafood such as prawn, squid, conger eel, and whiting and vegetables like shishito (Japanese non-spicy chilli), pumpkin, and sweet potato.

This is kabayaki* unagi (eel) served on rice. The sanshō (Japanese pepper) that is sprinkled on top aids digestion, removes the fishy smell, and freshens the meat that is otherwise quite fatty.

＊the fish is split down the belly, spine removed and skewered before being grilled over a fire, then basted with a thick sauce made of soy sauce, mirin, sugar, and sake and grilled again.

This donburi-mono is topped with asari (Japanese littleneck clams), hamaguri (common orient clams), and vegetables like spring onion simmered in miso soup. This originated as clams were in abundance in the Fukagawa river during the Edo period and the fishermen ate them in this way. 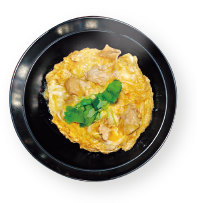 Chicken meat is simmered in warishita (a broth made of fish stock, soy sauce, mirin, sugar, and sake) before raw egg is stirred in to thicken and placed on the bowl of rice. It is called 'oyako-don' (literally parent/child-don) because it uses chicken and their eggs (The name can also refer to donburi-mono topped with salmon sashimi or flakes and ikura (salmon roe) pickled in soy sauce). If meat other than chicken, such as beef or pork is used in the same way, it is known as 'tannin-don' (unrelated-don) or 'kaika-don' (civilised-don), as it is a meat dish that became symbol of the shift to westernisation in the early Meiji period. 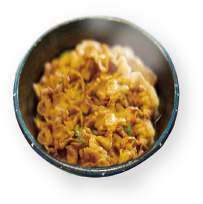 Thinly sliced beef and onion are simmered in a sweet, spicy soy sauce-base sauce and poured over a bowl of rice. It was first eaten in the Meiji period and was originally sukiyaki served on a bowl of rice and called 'gyu-meshi' (beef-rice). It is believed it was called 'gyu-don' by Eikichi Matsuda, the founder of Yoshinoya (a popular gyu-don fast food chain). It is even more delicious eaten with beni shōga (red pickled ginger), Shichimi tōgarashi (Japanese seven spice), and raw egg.

Originating in the Taishō period, this is the newest of all of the classic donburi-mono. It is usually ton-katsu (deep-fried crumbed pork cutlet) simmered in warishita broth (like oyako-don) and egg and poured over rice. There are other versions which use various other katsu including beef, chicken, mince, and prawn drizzled with sauce or red bean paste.

This dish was derived from karē-nanban (thickened curry flavoured fish stock poured over soba noodles) and it replaces soba noodles with rice. The Japanese style curry is usually made by adding warishita broth and soba noodle soup to curry sauce. The owner of a soba shop created it to try and coax back customers he'd lost to a western food restaurant. The name 'nanban' was originally 'nanba', is an old term for spring onions. Because of this, spring onions are often used in addition to regular onions. Karē-don is often found on the menu of udon and soba noodle restaurants. 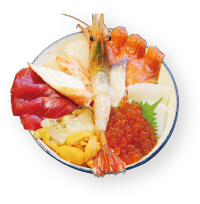 Of all donburi-mono, kaisen-don is one of the most popular! Fresh seafood used for sushi such as maguro (fresh tuna), scallops, salmon, squid, prawns, octopus, ikura (salmon roe), uni (sea urchin) are often used with a bit of wasabi. The name changes depending on the ingredients used, such as 'tekka-don' (fresh tuna) and 'uniikura-don' (sea urchin and salmon roe).

Did you know that Japan has its own 'Donburi Highway'? And you might be surprised to learn that there isn't just one but a number of them all over the country. Atsumi Peninsula in Aichi Prefecture's Tahara City has 43 restaurants overflowing with a variety of different donburi-mono for you to enjoy. They are currently holding a stamp rally event where you can win an original donburi bowl and even domestic airfares! (Until the end of December 2014)

Shinshu's Amanogawa 'Donburi Highway' boasts 9 uniquely named donburi-mono for you to try, including one made with horsemeat, 'Sakura-Don', and the black pork and gobo (burdock), 'Goboton-don'. Minobu-chō, a town in Yamanashi Prefecture, has collaborated with young local women to create the 'Irodori-Don', made with miso, chicken and fried vegetables. Why not play Haruo Minami's song 'Don Ondo' (produced in 1984) as background music and go for a drive along a Donburi Highway?

Not only can you make this with only a few ingredients, the well-balanced fish-stock flavour of this oyako-don will really take you to Japan! This recipe uses 'Tsuyu no moto' to create a delicious, authentic flavour. Mitsuba (Japanese wild parsley) is hard to get in Adelaide so try using celery leaves instead.

Tsuyunomoto tsuyu (dipping sauce) uses a well-matched, high quality soy sauce in a unique process to bring out 100% of the flavour of the katsuobushi (benito flakes). It has many uses including use as a dipping sauce for noodles and tempura, and even in nimono (slowly simmered foods) and donburi-mono, and with just a little preparation you can even make Japanese style salad dressing; really useful in all sorts of cooking!

② Heat the Tsuyunomoto and water in a shallow pan.

④ Lightly beat the eggs and stir them into the mixture made at ③, turn down the heat and put the lid on. Simmer until the eggs are half-cooked.

⑤ Take it off the heat, add the mistuba and put the lid back on allowing it to steam.

⑥ Fill a bowl with hot steamed rice and top it with the mixture made at ⑤. Enjoy!

The mix is fascinating for both Australia and donburi-mono!