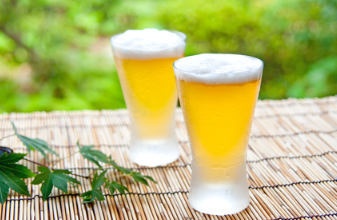 The days are getting warmer and daylight seems to linger longer every day. Summer must be near. Summer, of course, means lots of festivities--so it's time to make sure there are plenty of cold drinks in stock, and plenty of nibbles to accompany them. One unbeatable combination is beer and peanuts.

Did you know that peanuts are, technically speaking, 'pea' (or to be precise, legume) not 'nut', and actually grow underground? These tasty little nuggets of nutrition have been cultivated for a very long time, at least 7,500 years. Like so many plant foods enjoyed around the world today, they started out in South America, in an area just below the equator stretching across Peru and Brazil. Once they had been "discovered" by European explorers and traders in the 16th century, peanuts were taken around the world--being planted back in Europe, then Africa and Asia, around the Pacific, and eventually, in the 18th century, in North America by African people taken there as slaves.

Peanuts only started to be grown in Australia in the middle of the 19th century, planted by Chinese gold diggers in Queensland, and it wasn't until the 1920s that commercial crops started to be grown. Queensland is still the main place where peanuts are grown in Australia, but Australian production is only a tiny fraction of worldwide production (China is top, producing nearly half of the world's peanuts, followed by India and the USA), and Australia imports as many peanuts as it produces. 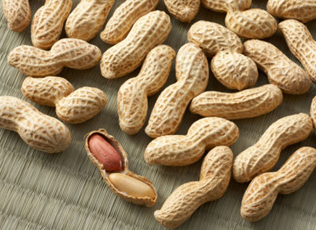 Another country that produces a small volume of domestic crop and relies heavily on imports to meet its peanut needs is Japan. Okinawa has a famous dish called jimami-tofu (ジーマーミ豆腐), which is locally-grown peanuts processed like tofu. Jimami translates as 'ground nuts', another common name for peanuts. In "mainland" Japan, however, peanuts are calledピーナツ, mimicking their name in English, when they have been roasted or made into some kind of snack, but there is a "native" name for the locally grown produce: 落花生 (rakkasei) , which describes part of the growing process (落花 =flower-dropping) of the plant. Chiba and Ibaraki Prefectures are the main places to go for fresh Japanese peanuts, which are eaten boiled, not roasted, and flavoured with soy sauce or miso.
Maybe you would prefer to just buy a bag of nuts for yourself and your guests, but remember that you're sharing in a centuries-old nutritional treat as you enjoy the festivities.

Gail Umehara / Wordsmith
During her 16 years in Japan, Gail juggled raising a family with, amongst other things, working as a translation assistant, librarian, and editor. Back in Australia, she continues to work with words as an interpreter, editor and TAFE lecturer.